HEHS E-Sports is more than gaming 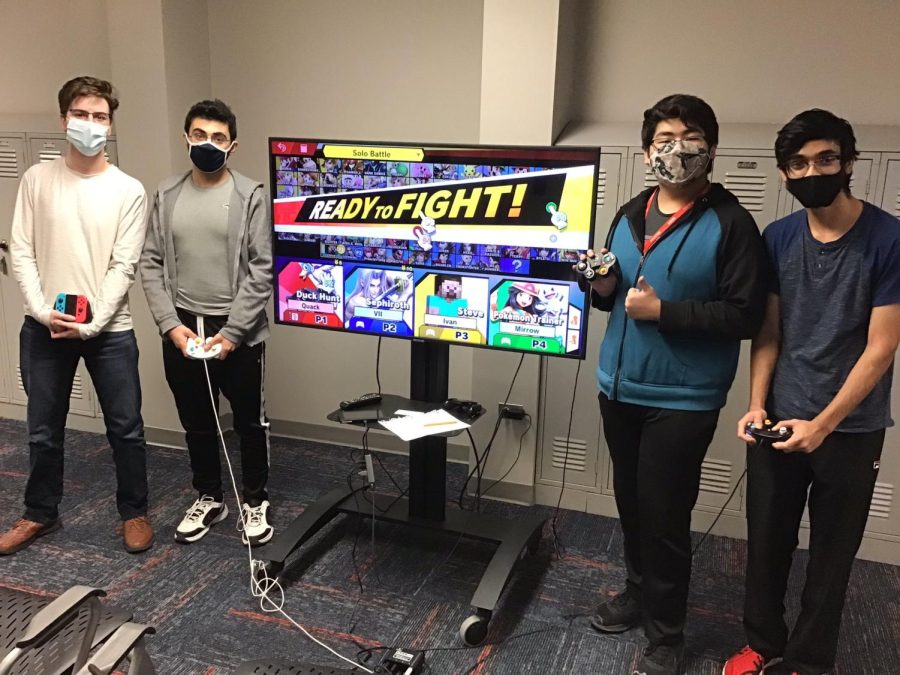 Hoffman Estates High School has recently established E-Sports teams for Super Smash Brothers Ultimate, Rocket League, NBA2k, and League of Legends. Students on these teams have learned many skills and life lessons through their time on the E-Sports teams similar to those students learn playing traditional sports.

Students on HEHS E-Sports teams have gleaned many benefits from engaging in E-Sports at the school. “I learned that you need to keep trying and try new things,” said Abrar Quadri, a senior and the 3rd seed on varsity Super Smash Brothers Ultimate. He also claims to have learned that there are many ways to approach a problem.

Many students have had a similar experience to Quadri, gaining life skills by playing E-Sports at HEHS. “It’s taught me how to be competitive in a healthy way,” said Begic. Begic also added that he’s learned, “Being able to step back and, instead of getting angry, I can assess the situation to get better,” said Begic.

Super Smash Brothers isn’t the only game where students are learning these skills. “I’ve learned teambuilding and leadership skills, as well as time management skills,” said Sean Doran, a senior and the main support for the League of Legends team.

All three also shared that they have met friends through E-Sports that they otherwise wouldn’t have met, and they’ve interacted with those friends outside of the school environment.

These benefits go further. Students have learned to work together and play together regardless of the large variety of differences between them. “You learn to play with everybody. Different playstyles and different personalities because everyone is different,” said Jasmine Tang, a senior and the president of the video game club.

The benefits of engaging with E-Sports go past the personal growth of students. “I still think there’s a stigma around E-Sports, but is getting a scholarship to go to college for E-Sports really nerdy?” said Thomas Rentner, teacher and head coach of the E-Sports teams.

Rentner also expressed a similar mindset to the students. “The best part is seeing kids work together and learn leadership skills,” said Rentner.

There are people who underestimate the effort that goes into being on an E-Sports team. The amount of time and energy that goes into performing at a high level in a game is incredible. Students on HEHS E-Sports teams have expressed a lack of agreement with that sentiment.

“If you think it’s easy then 1v1 me in Smash Bros, items off, FD only. It’s the same as saying basketball is easy. You need to prove it,” said Quadri.

Quadri isn’t the only one to express this idea. The other members of the team expressed similar dissent with that opinion. “People just talk without putting anything behind it. I want the people who just talk to come in and see how we play,” said Tang

Beyond high school competition, E-Sports is a rapidly growing career path. Beginning as a niche, it’s become a reliable source of income for players, coaches, casters, and many other jobs within the field. Rentner commented on this growth. “I believe that in 10 years, E-Sports will be as popular in popularity and viewership as conventional sports. So buckle up or we’ll leave you behind,” said Rentner.

Regarding the general opinion on E-Sports, many people lack information on E-Sports. “People are misinformed. The announcer of our teams literally said ‘I don’t know what that is but cool,’” said Doran.

Begic expressed concerns with the general opinion on E-Sports players as well. He doesn’t brag about being the fourth-seeded player on varsity Smash Bros because a lot of people will find it weird or alien. Begic expressed a desire to see more women joining E-Sports teams as well.

Students on the E-Sports teams do face challenges, similarly to anyone on any competitive team. “The key to any team is the environment. If there’s no one to push you, you won’t grow. To go from a stick to a sword isn’t too hard, but sharpening that sword gets harder the sharper it is,” said Quadri.

Continuing this trend, Begic expressed a similar comparison between E-Sports and other competitions. “In any competition the biggest thing is endurance. Taking lots of stress over short intervals. You need to constantly be on your toes,” said Begic.

The students on the E-Sports teams and the head coach expressed that they consider E-Sports to be of a similar value to traditional sports. Rentner even commented that “People with physical disabilities wouldn’t be able to compete in traditional sports but everyone can play E-Sports,” said Rentner.

Rentner praised the E-Sports scene further by saying “E-Sports is awesome because when I was in high school I would play one sport then go home and play video games. We get all the students like that in one room and they work together,” said Rentner.

On March 15, they will have another against Barrington, being hosted at HEHS. This will be the last meet hosted by HEHS during the regular season. Spectators are welcome assuming they respect players and remain quiet to a reasonable level. There are also matches on March 29 and April 5, hosted by Conant and Fremd, respectively.

The HEHS tech team has done a lot of work getting E-Sports set up within our school. None of this would be possible without their aid. “Everything to do with school Wi-Fi is meant to stop students from playing games,” said Rentner.