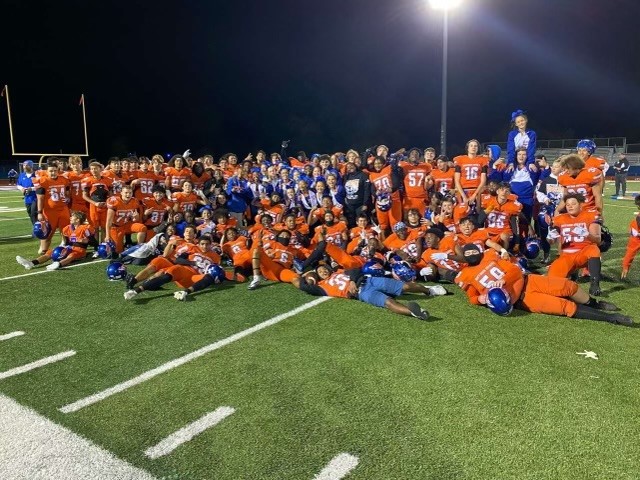 Hoffman Estates varsity football team is an amazing program for those who have a dedicated
passion for football. It’s a great opportunity for them to get better as an athlete and a person
overall.

“Hoffman football has changed me a lot, not just from the physical standpoint but it has shown
me a lot of life lessons, that life is hard and that no one cares so you have to put in the hard
work that people don’t want to do in order to be successful,” said Nathan Cleveland, sophomore and  varsity player.

The HEHS football team is extremely grateful for the hardworking coaches. Their dedication during practices and on Friday nights are unmatchable, and their tough love on and off the field is heartwarming.

“I think we might have the best coaches in the MSL because they are always pushing us to not just
to be the best at football players but the best person we can be,” Cleveland said.

Although their journey to victory isn’t finished, their work ethics during practice is the secret to
their showcase on Friday night lights. The team moves not just as a team but as a family. They are always there for each other making sure that at the end of the day they reach victory together.

“How you practice is how you play, so when it comes down to practice we give our all,” said Quincy Williams, junior. “We have no time to waste on not giving 100% because that’s how you fall off.”

Building a relationship with each other is key to the Hawks’ success as well because it gives them the comfort of knowing that they can count and depend on each other whenever needed. Also, being comfortable around teammates helps build a strong foundation for the team as a whole.

No one is perfect, and everyone has had bad moments in their life. It’s not about what happened, it’s about how you prevent it from happening again. Hoffman’s first games against Downers Grove North and Elk Grove were not the best, but those games served as inspiration during practice.

For some of the players this is their senior year, and it is hard when they lose; however, they bounce back. They make sure they work harder and they play harder. It’s all about elevation and improvement. To get better the team members are doing extreme workouts and practicing techniques that will help them improve on the field.

“It takes all of us to win,” said Lucas Mytch, senior.

It’s a roller coaster to get to where you want to be in life, especially when it comes to football. It doesn’t take one to win; it takes the whole team. HEHS football has taught everyone a lesson whether they are in the game or not. Their success is shown on the field, and it motivates everyone seeing our team win.

This team is not just a team, it’s a family. Building a bond for the football team is a key component because they strive as one whole and not one individual.

“Just being locked in with my teammates is important because we need every player to get the
job done, they’re my family,” said Stephon Sellers junior.

After suffering the loss of the first two games, the Hawks are bouncing back and ready to take action. A game that was held away was at Maine East on September 15. The team took home a great win. The Hawks were then back and their element and ready to go.

To prepare for the Hawks homecoming game against Conant High School, the team focused on rushing
work outs and drills to make sure that Mayor’s Cup stayed at home. There were many critiques made throughout their plays to make sure they had the best formation.

As the team made it through the 3rd quarter of the game, there was a bit of anxiety going throughout
everyone’s body. During the quarter there were many ties and back and forth with the score that caused the Hawks to come to the score of 42 and Conant 44 by the end of 4th quarter.

As the crowd fell silent, nerves flowed through everyone’s body. Then it was up to Varsity Kicker Emmanuel Correra, junior, to get ready for the game changer.

Going for the kick, it wasn’t too bright. Thanks to the Cougars, they created a false start that gave the Hawks one more chance.

This was it, one more lucky chance. Correra went in for the kick and secured the Mayor’s Cup
remained home.

“It felt like it was out of a movie. I’ve never had so many thoughts going through my head in this
game. But you know, Mayor’s Cup stays,” said Anu Ajibulu, senior.

The stadium filled with applause and cheers. The team couldn’t have done it without the help of
everyone that night.